Axe vs. Hatchet: Splitting the difference Whether you’re doing a DIY woodworking project or building a campfire, you’ll need the right tool for the job. The most common tools are axe and hatchet. But which one is more suitable for your needs?

To answer that question, we need to understand what these tools are. Although similar in appearance, there’s quite a difference between axe and hatchet. In this article, we’ll go into details about everything you need to know about these tools. So keep reading!

Difference Between Axe and Hatchet – The Ultimate Tool Comparison

What Is An Axe? 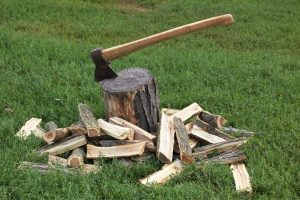 An axe is a lumberjack’s best tool for chopping, splitting, chipping, and piercing through the wood. It features a metal blade (usually either steel or iron) and a wooden handle. An axe is designed to be held in both hands, so that you can utilize your striking power to the maximum.

The blade has a thick, wedge shape that allows it to easily cut through the wood at different angles. This means that you don’t have to be strong like The Hulk to use this tool. It only requires a bit of skill and practice.

What Is A Hatchet? 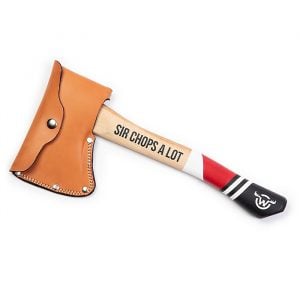 You might hear people calling the hatchet “a small axe.” But while the term originated from the Old French diminutive word for axe, these two are not the same thing.

A hatchet is a one-handed tool used for splitting wood. It’s way smaller than an axe, and that’s why it’s not suitable for big wood cutting projects. So if you want to cut down a tree, this is NOT the tool to reach for. But if you want to split firewood, it’s the best one to use.

Unlike axes, a hatchet usually has a hammerhead on the opposite side of the blade. This makes it a somewhat multi-practical tool, as you can use it to put a nail into the concrete wall, for instance.

Similarities Between Hand Axes And Hatchets

If you’re mistaking an axe for a hatchet, and vice versa – you’re not alone.

Most people don’t really see the difference, except that one is bigger than the other. But before we get into details, let’s see what makes these two tools so similar.

Components – Traditionally, both an axe and a hatchet were made of a metal head and a wooden handle. Nowadays, you can find both of these tools with handles made of steel or fiberglass as well.

Differences Between Hand Axes And Hatchets Paradoxically, the features that make these tools similar are also what makes them different.

Appearance – an axe and a hatchet look alike only at first. An axe is a much bigger tool, and it has a large blade on one side of the head and a poll on the other. A hatchet, on the other hand, features a hammerhead on the other side.

Purpose – An axe is used for splitting wood and logs, while a hatchet is better for smaller wood chopping, like splitting kindling.

Handling – While an axe requires two hands for striking, a hatchet is designed for one-handed use.

Can You Chop Wood With A Hatchet?

In short yes. But, the larger the logs are, the harder time you’ll have doing that. Ideally, you want logs to be 12 to 30 inches big. That way, you can easily split them.

Here’s how to do that:

That’s it. You are now on your way to splitting smaller logs with your hatchet.

Is A Hatchet A Good Survival Tool?

If you ask me, a hatchet is one of the best survival tools out there.

First and foremost, you can use it to chop down branches and make a campfire or a shelter. But aside from cutting down wood, there are other purposes where it can come in handy.

That metal part on the opposite side of the blade can also work as a hammer. You can use it for nails, stakes, or even breaking nuts out of their shells.

If you’re winter camping, a hatchet can be used to break the ice. Whether you’re stuck or simply want to reach the water source underneath, you can slam a hatchet onto it and watch it break into tiny pieces.

Hopefully, you never get in a situation where you need a weapon. But in case that happens, you can use a hatchet to defend yourself against the predators. You don’t need to swing like crazy with it to deliver a strong blow.

How To Split Wood With An Axe?

Using an axe requires a bit more mastery than using a hatchet. This shouldn’t come as a surprise given the fact of how large and heavy an axe might be.

When splitting wood with an axe, start with cleaning up around you. You don’t want anything to mess with your swing and potentially cause damage. Same as with a hatchet, you can find a raised surface, whether it’s a large rock or a tree stump.

First, make sure you have a proper posture, which means having your feet shoulder-width apart. Raise the axe above your head, with your dominant hand close right below the axe head, and the other one at the base of the handle.

As you swing it, your dominant hand should slide from above to meet your other hand. At the same time, you should slightly bend your knees and pull your hips backwards. As you can see, you’re basically using your whole body to split wood.

When To Use A Hatchet

A hatchet is a great tool for camping. First things first, it takes way less space than a regular axe. There are some pretty lightweight models you can find on the market nowadays, that pack compactly into any backpack.

Most woodcutting you’ll do while on the trail will be on smaller branches and logs, so a hatchet will be more than enough. If you’re making fire, then you can use it to split kindling or create tinder. Not just that, but a hatchet comes in handy in the wilderness, as you probably don’t have a hammer packed as well.

When To Use An Axe

As we established, an axe is NOT a great tool to bring camping, mainly because of its size and weight.

But let’s say you’re home and need to cut down that old tree that looks like it’s about to fall even in the slightest breeze. In this case, an axe is your best tool for cutting down a tree. People have been using it for the same purpose practically forever.

Now that the is cut down, why not turn it into logs for your fireplace? This is yet another task where an axe will shine. While a hatchet could technically do the same thing, it will take you hours to do that.

How To Care For An Axe Or Hatchet?

Any tool requires maintenance, and axe or hatchet are no exception. There are a few simple things you can do to keep them in good shape.

Let’s start with the head. Even the sharpest blade becomes dull with use, but you don’t have to additionally speed up the process. Avoid hitting the ground or rocks, as well as cutting knots in the wood.

While most axes and hatchets have steel blades, they’re usually not stainless. This means you have to take extra steps to prevent rust from happening. Keep moisture away by oiling the head. For this, you can use basically any oil, even olive oil if you don’t have anything else. Apply it all over the head, then remove excess with a cloth.

A wood handle usually features a protective finish, but it wears off with use. To maintain it, simply clean the handle from debris and apply a coat of linseed oil every now and then. It’s worth noting that linseed oil must be boiled for this. Raw oil doesn’t dry out – it stays sticky.

Finally, if your axe or hatchet has a leather mask, you’ll need to protect it as well. By this, I mean using a waterproof leather wax, which will keep it from stretching over time.

What Is The Difference Between An Axe And A Tomahawk? The term tomahawk is used to define a small axe used by Native American tribes. What’s interesting is that the word was used by the Algonquian people to name a hatchet. Yet, design-wise, these two tools aren’t the same.

Neither are a tomahawk and an axe. The first difference lies in their eyes. By that, I mean the hole where the haft is mounted to the head. In general, tomahawks have a round eye, while axes usually have almost a triangular-shaped eye.

Historically, it was easier to put a handle trough round than a narrow eye, and the design stuck around. If needed, you can easily remove the head for easier storage.

Finally, a tomahawk also has a longer handle compared to its head than an axe. And while long, tomahawks are generally much lighter than axes.

As you can see, there are some pretty visible differences between these two tools. But they’re also different in terms of usage. A tomahawk is suitable for chopping firewood, cutting bushes and small trees, etc… Pretty much similar to a hatchet.

Still, it’s more often used for throwing and similar recreational purposes than as a woodcutting tool.

Is The Correct Spelling Axe Or Ax?

And contrary to popular opinion, they have nothing to do with British or American English. In fact, you’ll see some of the largest publications in the United States, such as Time or New York Times to use the shorter version. But, the spelling “axe” is definitely more popular.

While both an axe and a hatchet can be used for cutting woods, there are situations where each of these tools shines.

An axe is an invaluable weapon for splitting wood and logs.

But if you need to make tinder or kindling, a hatchet will be much easier to operate with. If you’re camping, then the latter is the tool you want to pack.