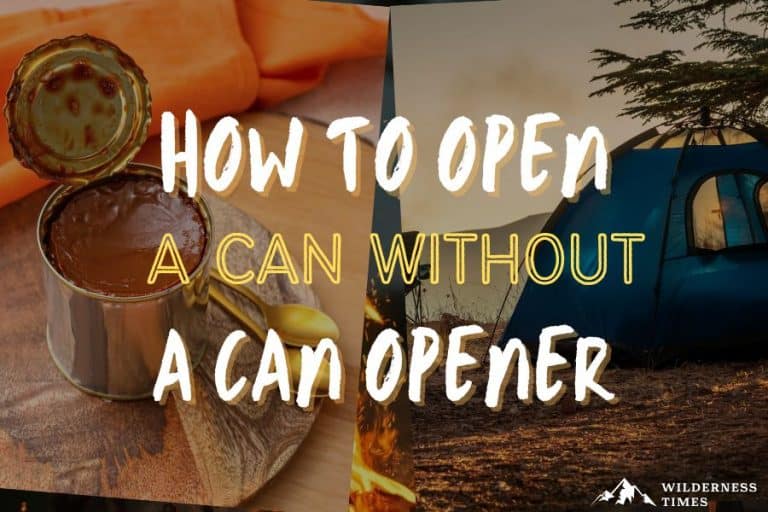 Just as you’re about to make some baked beans, you realize that your can opener was left at home.

How could this happen? You even used a checklist!

Well, there’s no point in beating your head about it now. What’s done is done. The real question is – what to do now?

Lucky for you, I know how you can solve the problem! The same thing happened to me on my last camping trip.

Of course, I only realized it when it was too late. The only thing I could do at that point is get creative. And I really did.

I tried a bunch of different things. Some of them worked, some didn’t.

Today, I’ll share with you some alternative options you can use to open a can without a can opener.

Let’s jump straight to the point!

Opening Cans Without a Can Opener: 6 Different Methods 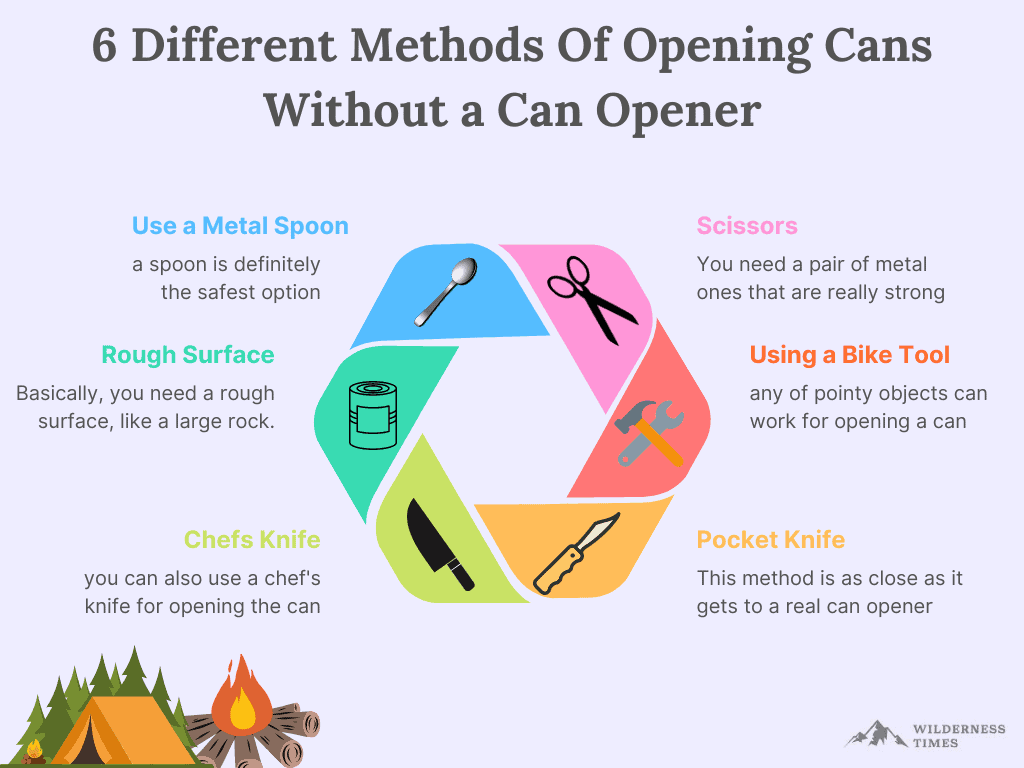 You’d be surprised how many things around the campsite can work as an alternative to a can opener.

Can’t think of anything? Here are six methods of opening cans without an actual can opener:

1. Use a Metal Spoon 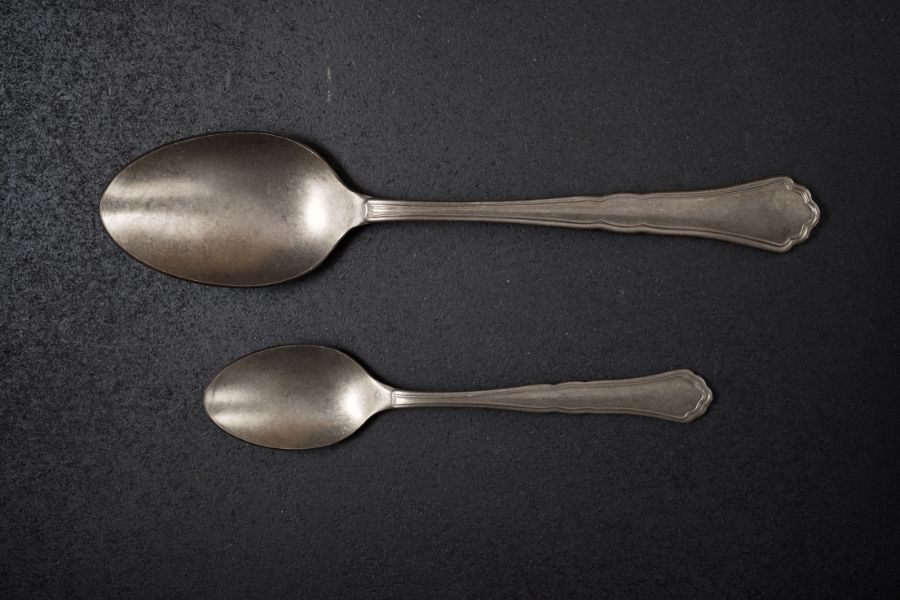 You might not have a can opener with you, but there’s a 99.9% chance you packed up utensils, including a spoon.

Now I know it might sound ridiculous, but a spoon is actually thin enough to pierce through the can yet sturdy not to break in the process.

For this, it has to be made of metal, not plastic.

Among all the alternatives to a can opener, a spoon is definitely the safest option available.

Compared to other options, the spoon doesn’t have any sharp edges that you can get hurt on.

Of course, the opened can itself can be sharp enough to get cut on, so you need to be careful regardless of the tool you’re using.

How to open a can with a spoon: 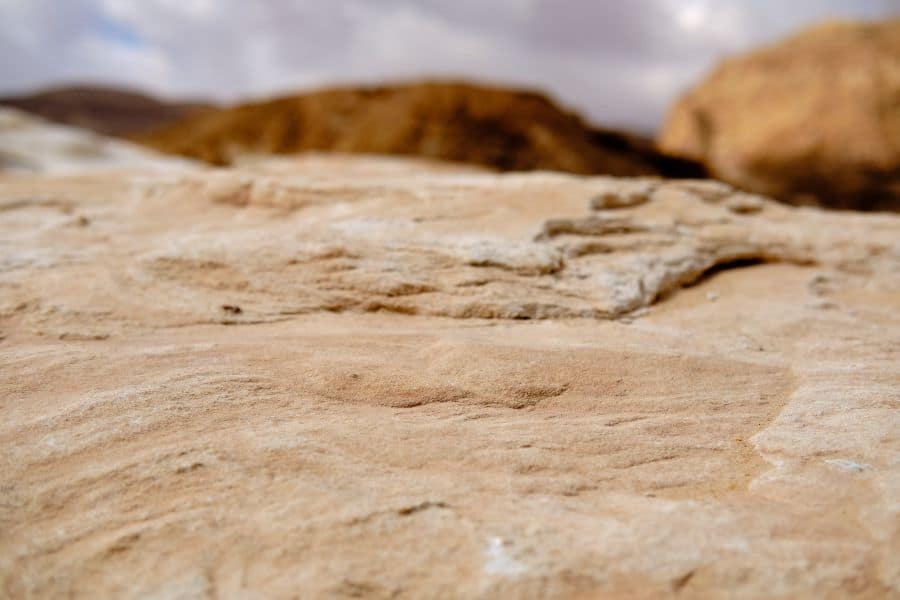 Let’s say you have practically nothing that can serve as a can opener alternative.

What if I told you that you can actually use your surroundings to open it up? And I’m not saying about smashing it down with a rock.

To be honest, this method can involve rocks, but it’s not as “smashing” as you might think.

Basically, you need a rough surface, like a large rock or even concrete, that will work as sandpaper.

This method might require slightly more time than others, but hey, at least you won’t remain hungry for much longer!

Prepare some paper towels or cloths to clean up any spillage.

Since you’re working your way through upside down, it’s practically unavoidable to have nothing leaking onto the surface underneath.

How to open a can with a rough surface: 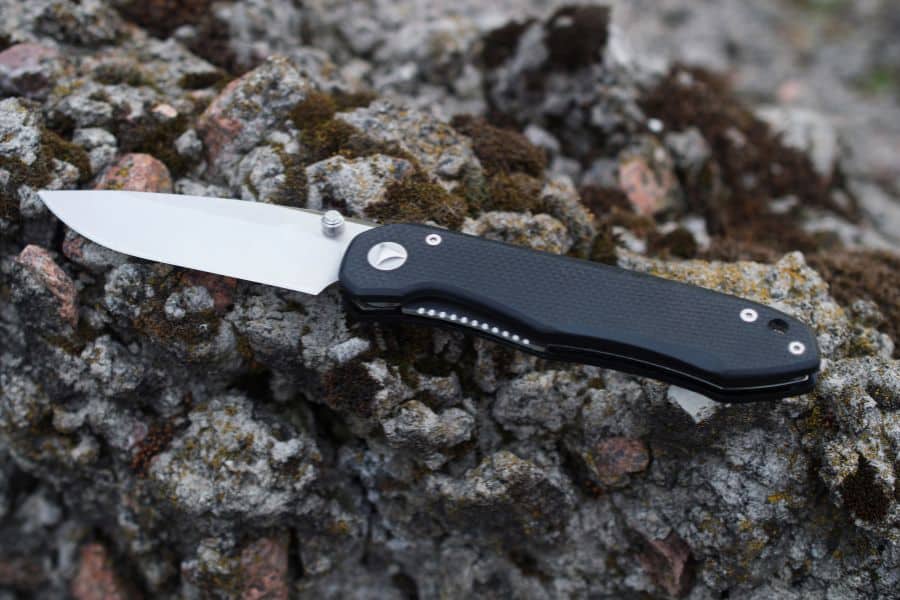 If you have a pocket knife (or any regular-sized sharp knife for that matter), you can also use it to open the can.

This method is as close as it gets to a real can opener. It’s relatively mess-free and, aside from the knife, requires a sturdy surface to put the can on.

While this method is rather easy, make sure you’re extra careful when using the knife.

If you don’t keep a firm grip and pressure at all times, it can slip and potentially cut through the skin.

Consider wearing gloves for extra safety while operating with a knife.

How to open a can with a pocket knife: 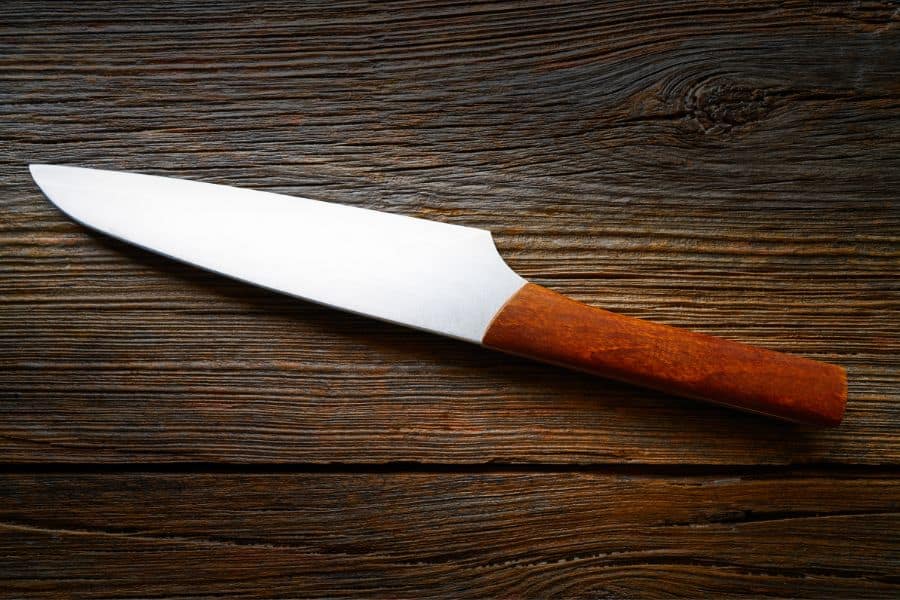 If you’re confident in your knife skills, you can also use a chef’s knife for opening the can.

For this method, it’s important to only use chefs and not a fillet or veggie knife.

The weight of the knife does half the job here, so doing it with any other type of knife wouldn’t be as effective.

How to open a can with a kitchen knife: 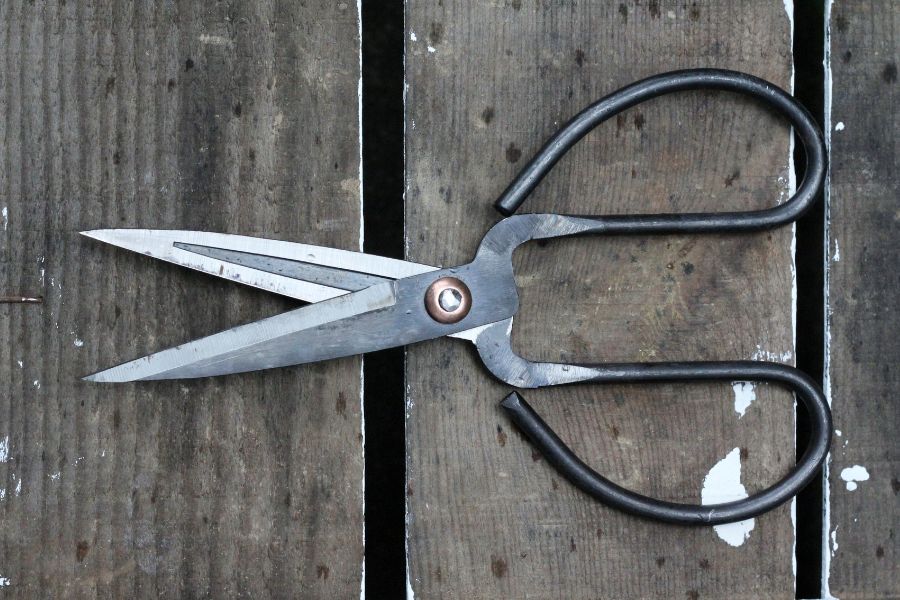 Scissors maybe not be a staple in your camping gear, but maybe they made their way into your gear this time.

Your first aid kit should also feature scissors, as you’ll need them for cutting bandages.

To make this clear, not all scissors will work for this. You need a pair of metal ones that are really strong.

Basically, they should be as hefty as garden shears, which are practically unbreakable. And I’m not even talking about the blades.

It’s the hinge part that can easily snap when you put too much pressure on it.

How to open a can with scissors:

Let’s say you’re bike camping. You surely have some bike tools packed up in the event you need to do a quick fix.

In that case, there’s probably a screwdriver or pointy plier in your bag. Well, any of these pointy objects can work for opening a can.

What’s also great is that they’re not as sharp as knives, so there’s less room for accidents.

This method is rather similar to using a pocket knife or scissors, with a few changes here and there.

How to open a tin can with a bike tool or pliers:

Safety is important, even with a proper can opener.

Personally, I somehow manage to get cut with pretty much any tool.

I attribute that to my clumsiness and not sloppiness when operating with different tools, as it seems like one can never be too careful when doing that.

Wearing gloves while opening a can without a can opener is the bare minimum you can do to stay safe.

The majority of these alternatives have sharp edges that can hurt you. In fact, the can itself is already too sharp, especially when opened in any of these unconventional ways.

When working with these tools, it’s best to keep the can on a sturdy surface that’s about the height of your hips.

This gives you the most control over the grip, so there’s less chance of the can slipping.

Never – and I can’t state this enough – hold the can between your legs.

While that is surely a stable position to work with, any of the tools you might be using for can opening can slip through your hands, potentially hurting your legs.

When poking a can with a sharp tool, always keep your moves small. Even though it might piece it faster, refrain from swinging too high.

If you miss the spot by as little as 1/64 of an inch, you can accidentally stab yourself.

Is it safe to open a can with a knife?

Using a knife to open a can has its risks. A sharp blade that can pierce through aluminum is definitely sharp enough to hurt you as well, so you really need to be extra careful when operating with such a tool.

Always hold the knife with your dominant hand. If possible, wear safety gloves when operating with a knife.

What do you do if your can opener won’t work?

If your can opener decided to budge on you, then try any of these alternative methods that work for you.

There’s surely at least one thing from the list you have at hand. If not, you can always resort to using a rough surface and sanding the can.

How to open a can with a fork? 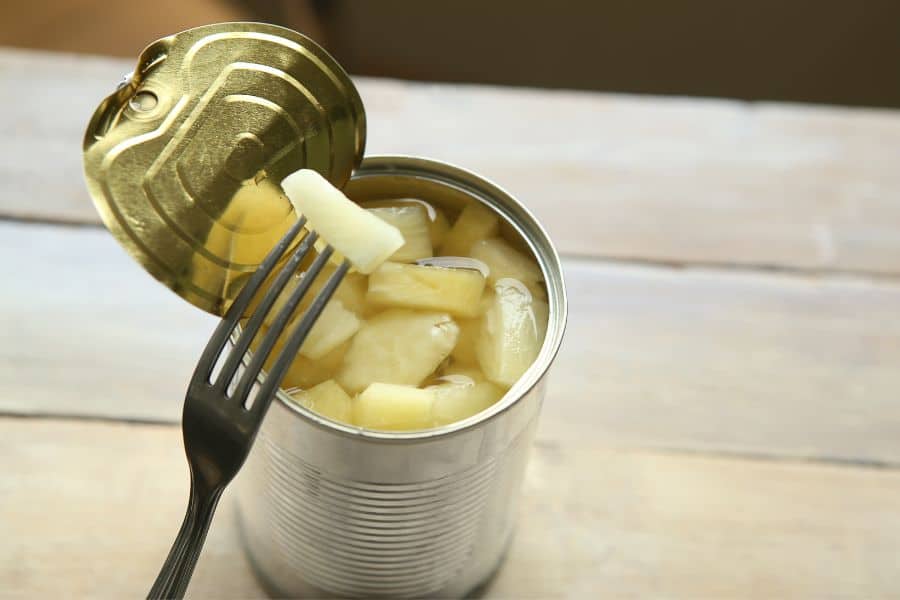 You can use a fork the same way you’d use a spoon to open the can. But instead of using the head of the spoon to pierce the can, you want to use the handle instead.

A fork is much easier to bend compared to a spoon, plus the handle offers more surface to apply the pressure.

What’s the best option/method to open a can safely?

Among all the alternatives listed, using a chef’s knife is probably the fastest and least sloppy way to open a can.

However, since that’s a very sharp tool, you need to be extra careful when using it.

But as far as safety goes, using a spoon or rough surface is the least risky option.

Except for the can itself, there’s nothing sharp to get cut on. Of course, if you’re not focused, you can always accidentally hurt yourself with any tool.

How do you open a can without tools?

If you don’t have anything at all, then use any rough surface you can find around.

This can be a large rock, but even concrete works. Turn the can upside down, and sand the lid over the surface.

Over time, this should thin it out so that can be pierced with slight pressure.

How do you open a can without ruining it?

No matter how careful you are, you’ll damage a can whichever method you decide on using.

But with sharp tools, like a knife or screwdriver, you’ll be able to open it with precision and very little damage.

If you leave your can opener at home, it’s not the end of the world. You probably have some sharp tools that you can use instead, such as a knife or a pair of scissors.

And even if you literally have nothing, you can always find some rough surface to use instead.

Whichever method you decide on using, make sure you’re taking all the precautionary measures to open the can as safely as possible.