Skip to content
Home → Camping → Bear Safety Tips → How Fast Can A Bear Run? (Why You Should NEVER Run From A Bear)

How Fast Can A Bear Run? (Why You Should NEVER Run From A Bear) 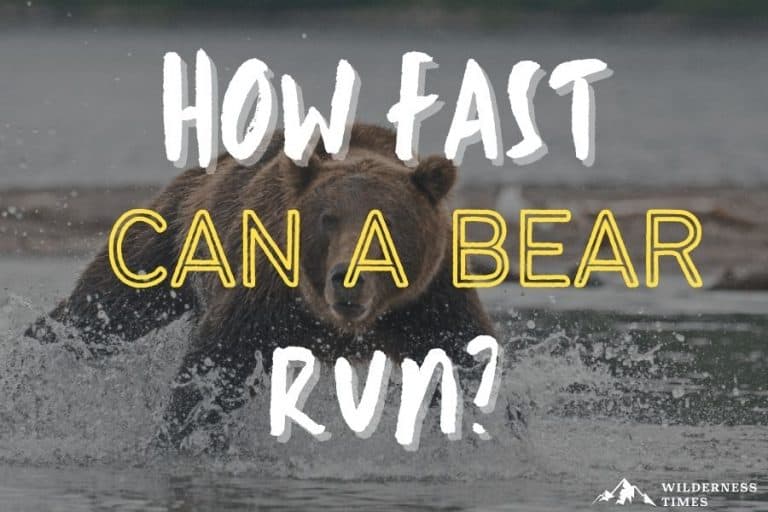 Bears have a chubby appearance that makes us think they couldn’t run half a mile even if they wanted to. But this couldn’t be further from the truth.

What if I told you that the average running speed of a brown bear is 25 mph, which is as fast as a tiger?

If you want to know how fast each species living on the American continent can run, as well as how well we humans stand against them, read on.

How Fast Can A Bear Run? 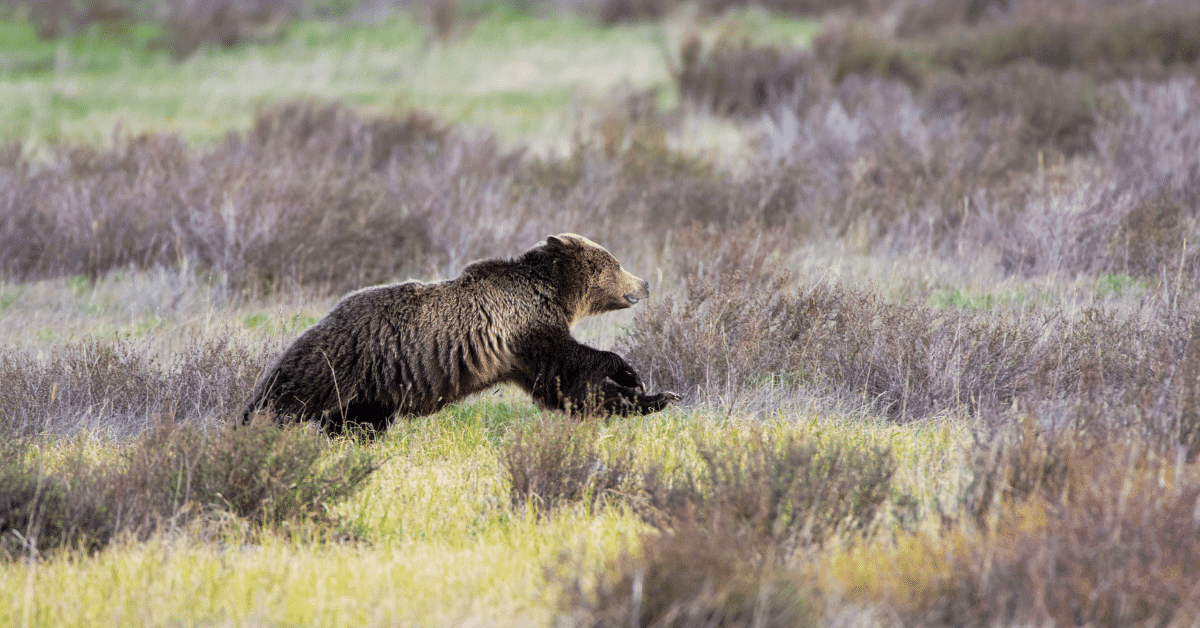 Obviously, not all bears run at the same speed. How fast they can run mostly depends on their size and weight.

I’ll break it down into different members of the Ursidae family that live on this continent.

When it comes to brown bears, there are two species living in the US: the Kodiak bear and the grizzly bear.

How fast are Kodiak bears?

Kodiak bears live, as the name suggests, in the Kodiak archipelago in Alaska.

Kodiak bears can reach speeds of 25 mph when running over a 2-mile distance.

But if they feel threatened, Kodiak bears can pull off a short sprint at 40 mph. That’s as fast as a zebra!

How fast are Grizzly bears?

The North American Brown Bear, otherwise known as the Grizzly bear, lives throughout the rest of the US.

Grizzly bears can run at speeds of 35 mph over short distances.

Don’t believe me? Check this out:

But, just like their closest relatives Kodiak bears, grizzlies can reach up to 40 mph in extreme situations. So if a mother bear feels like her cubs are in danger, she’ll pull off a fast sprint.

Other bear species are catching up to grizzlies when it comes to running.

How fast can a black bear run?

Black bears can run at speeds between 25 and 30 mph when the situation calls for it.

Of course, I’m talking about short distance running.  They’ll run their best speed for a quarter to half a mile, at most.

But with bears, that’s usually long enough for them to overtake their prey.

How fast are Polar bears?

Finally, I should also mention the polar bear. Even though they can only be seen in one US state (Alaska), there’s a possibility of encountering them if you ever go there.

Polar bears, like their Kodiak relatives, are huge. They can weigh up to 1,500 pounds!

This might make you think they’re not as fast as other members of the Ursidae family. And you’d be correct.

But while a little slower than other bears we mentioned, the polar bear is still pretty swift.

Polar Bears can run up to 25 mph, even over ice!

Now that’s quite a skill.

Why Are Bears Fast?

I know what you’re thinking – how can a bear be so fast?

After all, they have flat feet, a chubby stomach and a thick layer of fur.

But underneath all that, they also have a muscular body.

The way their bodies work is pretty interesting. As you already know, these animals spend quite some time in hibernation. But, once the spring comes, they leave their dens and go back to their active lives.

Here’s an amazing fact – their muscles don’t suffer from the period of inactivity.

If you’ve ever broken a bone or spent some time hospitalized, you know how fast you can lose muscle strength. Well, that’s not the case with bears.

After they wake up from their winter slumber, they might feel a bit groggy, but that’s it. They quickly get back to their everyday routines. With this in mind, you get the picture of how strong their muscles must be.

But, their muscles aren’t the only reason why they run fast.

Bears also have thick, long and sharp claws that can be up to four inches long. These claws prove to be quite helpful when running on soft soil.

On the other hand, these claws will slow them down when running on hard surfaces.

Finally, bears need to be fast to catch their prey. Berries and fish aren’t such a good source of protein. They get this nutrient from animals like moose, elk and deers. And in order to catch these speedy mammals, they need to be able to catch up.

Can A Human Outrun A Bear? 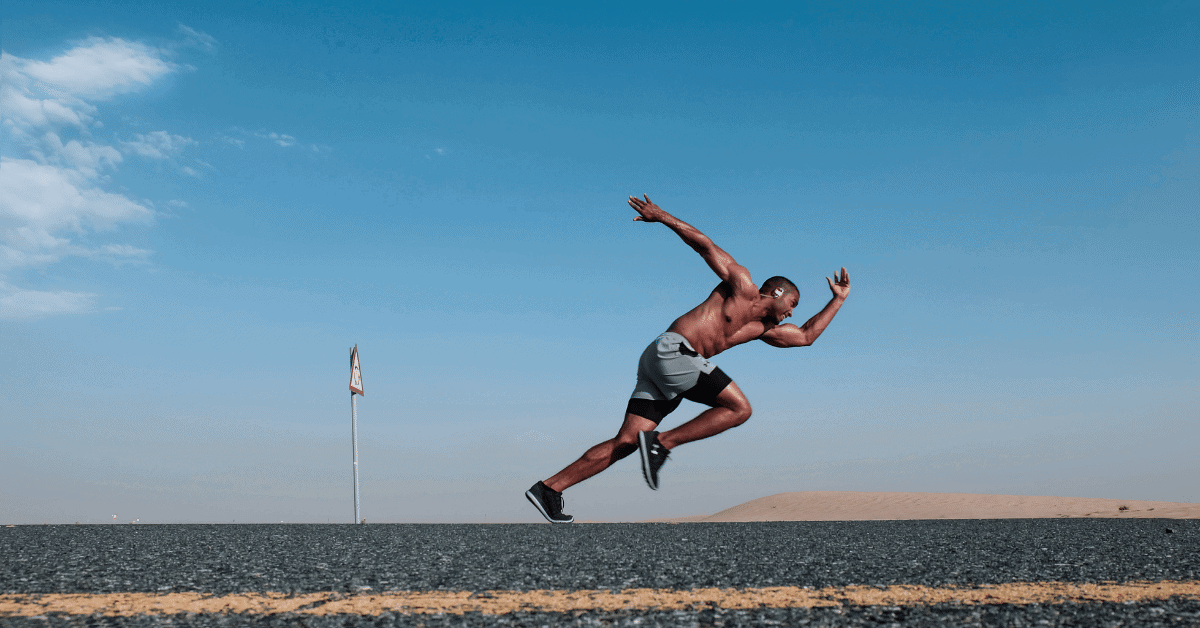 Seeing a bear in the wilderness can be terrifying. When standing on their hind legs, these beasts can be eight to nine foot in height.

To most people, the first thing that comes to mind in such a situation is to run.

You’ve probably heard it before, but let me repeat – never run from a bear.

You know what his highest speed ever reached was?

This means that, even at his finest hour, Usain Bolt could not outrun a bear.

So, while we tend to run incredibly fast when we’re frightened, there’s no way that we could escape from a bear chasing after us.

What Should You Do If You See A Bear? 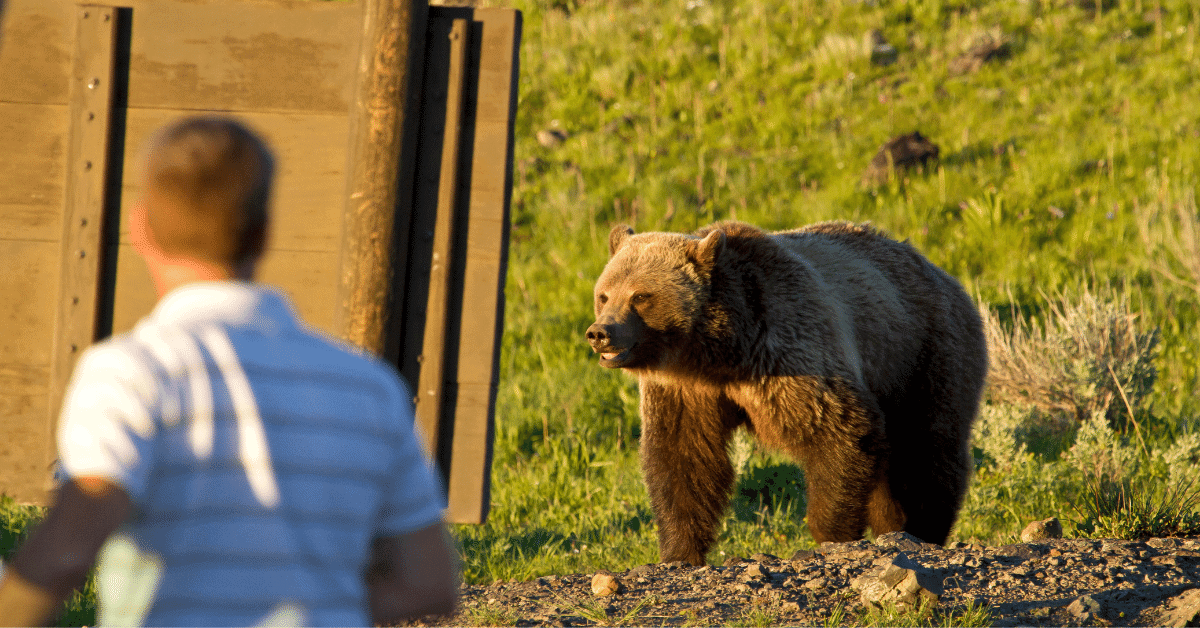 Ideally, you’d want to avoid encountering these animals while hiking. This might sound impossible, but there are a few things you can do.

Contrary to popular belief, bears don’t really want to be close to humans. That’s why you should make noise constantly throughout your hike. It will let them know you’re there, and keep them away.

Another thing you should do is store your food properly, so they don’t sniff out the scent. Because if they do, you’re likely to have hungry guests over for dinner.

But, if you do see a bear during your hike, the most important thing you should do is stay calm.

Remember, they don’t see you as food or a threat. As long as you’re not making any unexpected movements or high-pitched sounds, a bear will leave you alone.

Try talking to the bear in a low voice. That way, you’re showing that you’re a human and not an animal. Try to make yourself bigger by climbing a chair and wave your hands – but not in a psychotic manner.

Start moving away, but slowly, and never turn your back on the bear. Ideally, move to the side, so that you can see where you’re going. Do this until you’ve moved far enough for a bear to show any more interest in you.

Finally, always carry bear pepper spray. These sprays are a must when venturing into bear country, and are very effective when sprayed from a 4’11’’ to 9’10’’ distance.

This is only temporary and it’s completely harmless to the bear. The effect lasts around 45 minutes, which gives you enough time to leave the area.

Thanks to our teddy bears we all owned as kids, we tend to see bears as cuddly and clumsy animals.

But in reality, bears are far from cuddly and clumsy.

They’re strong, agile and extremely fast. The slowest members of the Ursidae family, Kodiak and polar bears, run at 25 mph. Black bears can reach 30 mph, while the grizzly bear tops the list with an average of 35 mph. Not even the fastest human on Earth can keep up with them.

If you ever have a bear encounter on a hike, I hope I’ve convinced you to never run away. Instead, stay calm and identify yourself.

You should also have a bear spray ready at hand, but if you follow these tips, it’s very likely you’ll never have to use it.

More on Bears from Wilderness Times